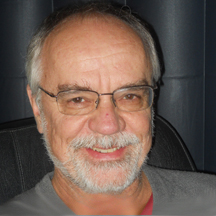 Mark Wolf served as the Training Director for the Runaway and Homeless Youth Training and Technical Assistance Center (RHYTTAC) from 2012 – 2018 when RHYTTAC was a program of the National Safe Place Network. Prior to his work at RHYTTAC, Mark served as the Director of the K-Town Youth Empowerment Network for Tennessee Voices for Children, a SAMHSA System of Care grantee focused on homeless transition-age youth with a mental health diagnosis.  The program, which began in 2010, has been recognized by the Tennessee Department of Mental Health and the Substance Abuse and Mental Health Services Administration.  The majority of Mark’s career has been with Child and Family Tennessee where he managed and directed the runaway and homeless youth programs for 25 years.

Mark received his MSW Degree from West Virginia University and holds a Bachelor of Arts Degree in Social Work and Sociology from Utah State University.  Mark has an extensive history in training, including certification through the Child Welfare League of America in Effective Supervisory Practice.  He has provided leadership in youth services at the local, state, regional, and national levels and has presented at multiple national conferences.  Mark has been recognized for excellence by National Safe Place, the Child Welfare League of America, and the National Network for Youth.